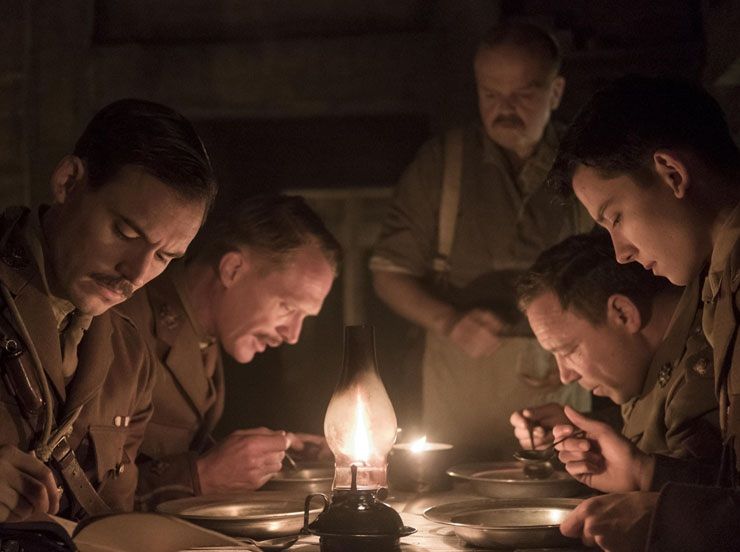 How did you first get involved in the project?
The producer Guy de Beaujeu and the writer Simon Reade had been working on the film for a little while so I was very lucky to get it financially at quite an advanced stage, as they had got most of the money together and a script that I felt was in a really great shape. But also something that I felt that I could do to it to harness what I felt was the cinematic potential that lay in what might have been perceived as its challenges, which is this idea of a very enclosed, claustrophobic space and I thought what was he had here was potential for something very intense and something where we could limit the field of vision in a sense, which is unusual for a film, but replicate the experience of what these men went through.

Were you already familiar with the material?
I knew of the play but had not seen it and did not study it at school, which I knew a lot of people had, and I hadn’t seen it in the theatre or the previous James Whale adaptation – and I decided to keep it that way. What was interesting for me was that Simon Reade had found the novelisation of the play, and so Sherriff had already begun to open up his play anyway in this book that was written in the early 1930s, and so my reference was going back to that and that was the guide for adapting. We saw in our heads that we were adapting the book perhaps more than the play, so that it wouldn’t carry any of the vestiges of theatricality, which I didn’t think would serve it well as a piece of film.

Tell us about adapting the script
We did around a year’s worth of script work in a month for this to get it ready, so we really focussed on cutting out anything that felt extraneous, and finding ways to open up the scenes as well to get them out of the dugout and bring in other characters as well, and to bring in what I felt what was lacking in the play. In the script I felt it could be helped with this sense of a much bigger regiment, the presence of the men beyond the dugout. And also I really felt it important…that we made it clear right from the start not only is there this Russian roulette idea that the men spent six days at the front – which was a very new thing to me, I hadn’t realised that – but also there was this attack that was imminent. It was clearly going to come and so it becomes a question of when not if, and that allowed us I think to make a 100 minute film that hopefully is a very intense experience for the whole of that duration, because I felt that that’s what these people went through times a thousand, so if we can try to transfer or convey a fraction of that experience to the audience that would be a very effective, very powerful and very important thing to do.

Tell us about your incredible cast
Sam Claflin had seen the play when he was at drama school and an ambition of his was always to play Stanhope, so that was very very straightforward and he absolutely laid his heart out on the table and said he wanted to be in this film, come what may. And we were able to bring other people to it [and] their performances are so strong that they somehow channelled something or felt something intuitively about their characters that they were portraying, whether that was Asa being exactly the same age as the character is portrayed, or Paul Bettany whose father was a teacher, but also had an uncle who was in the military…

Was there anything that shocked or surprised you while making the film?
The age. The sense of a kind of conveyor belt I suppose, of young people coming through, who would go to school, go to university and go straight to the front. Aa nd as a father of three boys, it has a powerful effect really thinking about transplanting yourself a hundred years ago, what would we be doing? And that had a big impact for me on how important the whole thing was. [Also] spending six days of every month at the front. I was…under the illusion that they were just there, but actually there were on rotation. What an insane six days those would be, every time not knowing what was going to happen to you! There was a book I read as reference called Six Weeks, which was the average life expectancy of an officer at the front line, so I think all of these things we were trying to feed into [the film]. Looking at the archive material, and I made a conscious effort not to see any fictional accounts of WW1 films, and instead to look at real archive material that was shot and not still photographs, but just home movies to see the humanity and the humour and the sharing. I suppose all the things that really pricked me when I was researching or looking into it, I tried to harness. And [also] how small the trenches are. When you are in a real trench built to scale, they are not these big wide things that Stanley Kubrick dug for Paths Of Glory in straight lines. They are these kind of rabbit warrens, higgledy piggledy rabbit warrens which are horrific and cold…

What films or ideas inspired you while making this?
For me, there were two big things that I looked to. One was the first hand accounts of what life was like, and the other were films that embraced claustrophobia and used that as a key element in the storytelling, such as Das Boot set in a submarine, which was a brilliantly intense piece of cinema and you barely leave the submarine. The other one was Alien…with the idea that there is an alien or monster out there, and everybody knows it’s there. I suppose everyone tries not to talk about it because of its inevitably, but how do you create pressure and tension from not showing something, so those were very strong references.

What filming locations did you use and what were the conditions like?
I insisted that we shoot in real locations, and we managed to find this trench network near Ipswich and we built on it, and a couple of days before we started shooting, which was in November of 2016, we just had a massive downpour and the whole place just turned into sludge and mud, and you literally couldn’t walk through it at all, and you’d freeze your feet. But that instantly helped us and that was a massive boost to what we were trying to do because for everyone this thing became a very real environment, particularly for the actors… And it created an amazing camaraderie as well, and I think that’s another really important thing that this film shows, is that in this awful situation, there’s a lot of love and a lot of bonding between all of these people.

Tell us about using the camera as an observer during the film
We made a decision very early on about what the identity of the camera would be, what was the purpose of the camera and what we were trying to achieve and I suppose R C Sherriff was down there in that dugout writing about his experience, so I said that I thought that the camera should mirror that in a way. Not wanting to sound to pretentious, but what we were trying to do was to imagine the world that Sherriff experienced that he then went on to write about…so the camera was always close, so…you don’t see anything that the soldiers don’t see, you don’t see over the top because they’d get their heads blown off until they finally go over in the rain and suddenly you see the landscape, chaotic as it is, revealed to you. So it was kind of an exercise in discipline – giving ourselves some rules to work by, but I think we all found that a really liberating experience.

Tell us about releasing the film 100 years on
[Making this film now] was about representing this experience in as fresh and visceral a way as possible, rather than like a commemoration in a sense... I think the best way to commemorate something is to bring it absolutely into the present, using all the film making techniques that one has to hand, to present a very visceral experience that I would hope lots of young people would go and see, and not feel somehow that the space of time has pushed them away from that experience.

Many films are accused of romanticising war, but not so here...
Guy, Simon and I felt so strongly when we first met that we …weren’t going to try to push the heart strings or introduce romantic storylines that don’t fit, or whatever, we were just going to try and be really really honest and create an experience that I hope has left people with a feeling, a very powerful effect at the end which doesn’t mean it needs to trigger various emotional moments in a contrived way along the way. I think it should just be true to itself and be powerful but not through lots of artificial manipulation.

What can audiences take away from Journey’s End?
I hope it leaves people angry, as I feel even now, about the sheer waste. I think it is about never taking peace for granted. I grew up with this amazing peaceful existence…and the generations before that didn’t. It began to feel relevant as we were making it and you hear all these stories of the friendships and allegiances in Europe being unpicked or being provoked or causing unease – all of these things that we have benefited from. So I would love people to be thinking about that really, and not taking for granted what we have, and being very very careful about preserving peace and prosperity, which goes hand in hand.

Journey’s End is in cinemas from Friday 2nd February, courtesy of Lionsgate UK.