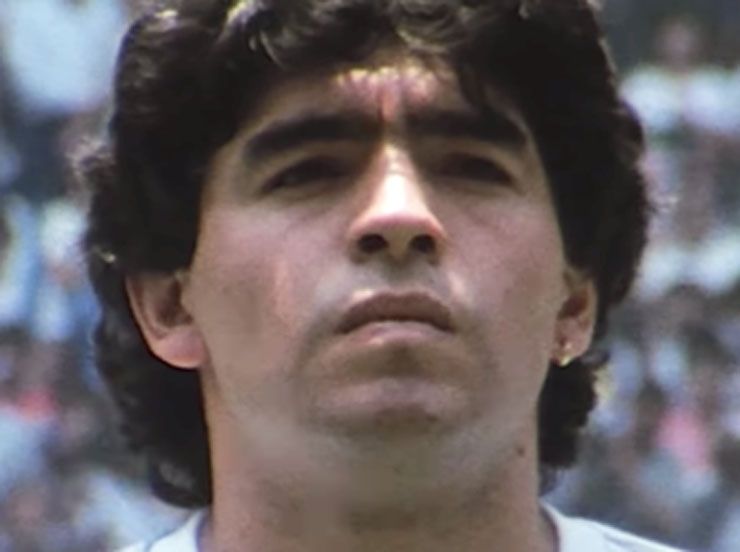 What’s It About?
The rise of the footballing genius that was Maradona, with his ascent in Naples and the 1986 and 1990 World Cups, to his rapid fall from grace.

Who’s In It?
Diego Maradona

Audiences Expect:
In the last decade, there has been a bore off between football fans as to who is the GOAT of football – Cristiano Ronaldo or Lionel Messi? Both seem equally brilliant but in this age of definites, apparently there has to be one.
Well in the 1980s, there was really only one – Diego Armando Maradona. Born into a slum in Buenos Aires, Maradona was marked out as a prodigious talent from a young age. Following a contract with Argentina Juniors as a teen, enabling him to become the main breadwinner for his whole family, Maradona had a big money move to Barcelona, which ultimately turned out to be a disaster follow ill discipline and a series of injuries. With the poor man of Italy, Napoli, being the only club to offer him a silver lining, despite severe money shortages, Maradona moved here with his first steps to becoming a footballing god.
And this is where the brilliant Asif Kapadia, and his incredible team of researchers and editors, who previously produced the remarkable Senna and Amy docs, begins this documentary – in the car on the way to his unveiling as a Napoli player.
Using brilliant virtually unseen footage taken from Diego’s own camera team, we follow Maradona’s car on a high speed chase through the streets of Napoli that wouldn’t look amiss in The French Connection, immediately setting the scene, setting the expectation and the excitement and drama.
The documentary then follows Maradona’s ascent from boy to man to living god, both in Naples and Buenos Aires after he helped deliver two Scudetto titles to Napoli – the first in their history – in 86/87 and 89/90, plus a World Cup to Argentina in 1986 and a final in 1990.
Asif Kapadia centres on his meteoric rise in the football world, and the success of the teams around him, but ultimately the success came at a price. Adored by the Napoli fans, he also came to the attention of the Camorrista criminals, and spiralled into women and addiction. The tipping point ultimately culminating in him helping Napoli win their second title, and then Argentina beating Italy on Italian home soil in Naples itself at the 1990 World Cup, which saw Maradona abandoned by the Italian fans who loved him, as well as by his Neapolitan criminal and legal friends, who hung him out to dry.
Kapadia and his team deliver a fascinating, indepth and personal look at the genius that was Maradona, and help explain some of his demons and some of the reasons and off field activities behind them. Incredible footage, high octane drama and a cracking soundtrack, with a wonderful rags to riches, saint to sinner storyline.
If one had to level a criticism at the documentary, and this is a little harsh, but it would be the lack of talking heads of contemporaries, the limited time spent on his career at Barcelona, and his time post Napoli with his interesting political persuasions - though one does have to appreciate this is not really feasible in the time frame required for a theatrical release. Perhaps a mini series on Netflix?

In A Nutshell:
Another brilliant researched and compelling piece of filmmaking with a remarkable rags to riches, saint to sinner protagonist.

Highlight:
Everything really but that opening scene which really sets up the documentary

News: Liam Neeson’s latest hits the Mark in the US

Action thriller The Marksman took all its opponents out in the US Box Office in its debut.

Trailers: No Time To Die - Trailer 2

Bond's retirement is short lived and he is called back into action to help Felix Leiter to rescue a scientist.

We caught up with Autumn de Wilde, ​the director of Emma., ​the latest adaptation of Jane Austen's classic.​

News: Liam Neeson’s latest hits the Mark in the US

Action thriller The Marksman took all its opponents out in the US Box Office in its debut.

Trailers: No Time To Die - Trailer 2

Bond's retirement is short lived and he is called back into action to help Felix Leiter to rescue a scientist.

We caught up with Autumn de Wilde, ​the director of Emma., ​the latest adaptation of Jane Austen's classic.​