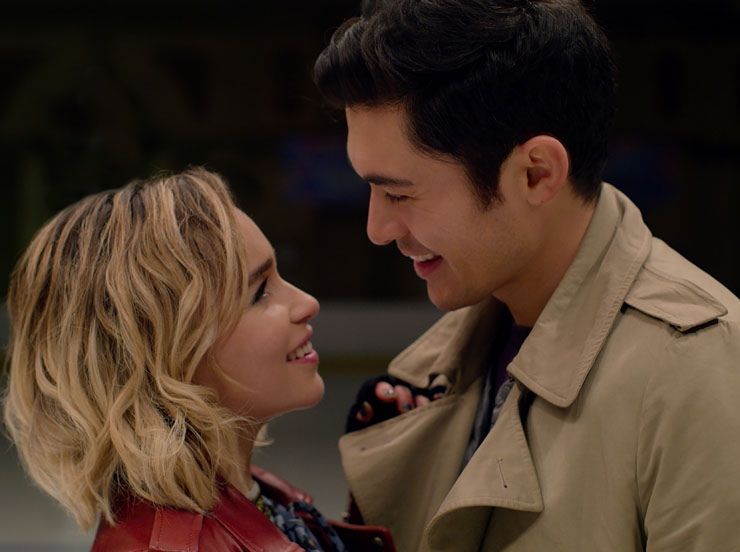 What’s It About?
A self-destructive troubled young woman finds her life takes a new turn after a chance meeting with a handsome guy. But things are not always that easy…

Audiences Expect:
On paper, Last Christmas ticks all the right boxes. Festive fare in the mould of Notting Hill or Love Actually, with leading lady Emilia Clarke, a top notch director in the form of Paul Feig of Spy and Bridesmaid fame, an Oscar-winning actress and screenwriter who performs both roles for this namely national treasure Emma Thompson, and hunky heartthrob Henry Golding from Crazy Rich Asians.
Throw into the mix the back catalogue of the awesome George Michael, and what could go wrong.
To be honest, even a tepid script with the aforementioned would get plenty of buzz and a free pass thanks to its frothy festive nature, but in truth it disappoints.
The film sees Kate, a troubled mess of a woman. Thanks to serial bad choices – exemplified by her leopard skin coat, heavy makeup, revolving door of different men, her deadend Christmas job, and general selfish demeanour, things are looking pretty bleak for her. Long gone are the dreams of this one time talented singer, and her Croatian mother is rightly concerned about her.
But then, a hottie named Tom miraculously wanders by her store and, despite a rocky start, seems to sweep her off her feet. As she starts to turn her life around and look at life in a more positive manner, largely thanks to him, things start to look up – something Tom is at great pains to repeat ad nauseam.
But life is never quite that simple, and in true Bridget Jones style, there is plenty of jeopardy thrown in.
Looking at the positives, everyone loves a festive film, and if it’s a good rom-com, then so much the better. Who doesn’t want an uplifting experience? A great joke about Brexit, and a hilarious performance by Emma Thompson as the challenging mother certainly elevate the film – with Thompson stealing all the best lines and indeed the scenes too – and who wouldn’t if they’d written the script. And the film is punctuated with classic George Michael songs who had a cracking voice and some fabulous songs from Freedom, Heal The Pain, and Faith, as well as the nostalgic Wham pop. Unfortunately the music seems to sit at odds with the film, and is horribly crowbarred into the script. For instance Wake Me Up When You Go-Go when Kate wakes up, or Heal The Pain at a particularly poignant moment. It’s just too on the nose. Yet there is no hint of I Want Your Sex when Tom turns up.
Emilia Clarke too is a little miscast and, for this writer at least, clearly struggles a little with these kooky roles with Me Before You a case in point. The charismatic Henry Golding impressed last year in Crazy Rich Asians, but is given very little to do in this one other than dance around like Dick Van Dyke on the street and repeat the line ‘Look Up’, both of which become irritating fairly quickly.
The script too is weak before delivering a telegraphed if terrible surprise or two, threatening to undermine the whole thing, and then to add insult to injury, it all ends with a poorly executed cameo.
Last Christmas certainly aims for the lofty heights of a Richard Curtis or Bridget Jones film, but unfortunately it comes up well short and will no doubt leave audiences wishing they had ‘Turned A Different Corner’ in the cinema.

In A Nutshell:
Frothy and festive, but Last Christmas disappoints, delivering more of a whimper than a Wham!

Lowpoint:
The script
The plot, particularly in the final third