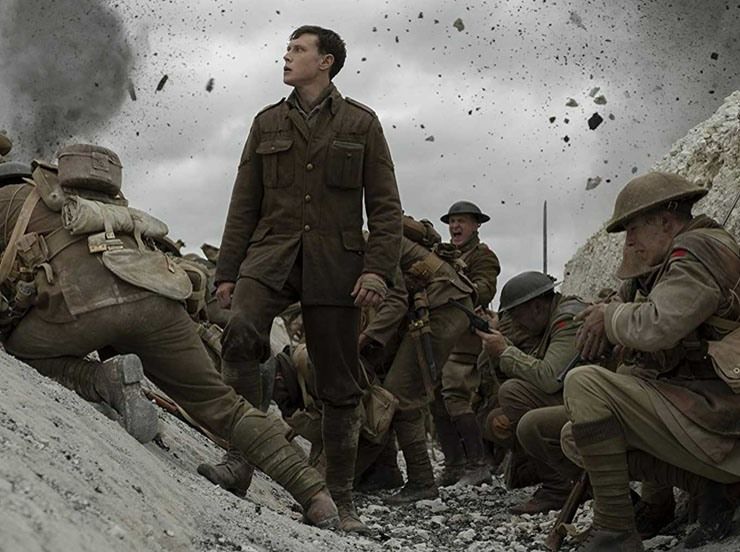 What’s It About?
Set in WW1, two soldiers are sent on essentially a suicide mission to deliver a message deep into enemy territory to prevent an assault which is actually a deadly German trap and will most likely lead to the deaths of 1,600 troops including one of the messenger’s brothers.

Audiences Expect:
It looks like 1917 could be the dark horse this awards’ season, if the Golden Globes are anything to go by. The passion project of Sam Mendes, inspired by his grandfather, is certainly the talk of the town with its one shot feel, and it is certainly a remarkable feat of film-making, thanks in no small part to the skill of Mendes himself and the renowned cinematographer Roger Deakins.
Set during the First World War, 1917 sees two Lance Corporals, played by George MacKay and Dean-Charles Chapman, given what is tantamount to a suicide mission. It would appear that British troops are walking into an ambush set out by the Germans and only uncovered by recent aerial photography. Cut off from traditional communication, someone has to brave the numerous dangers to deliver the message by hand and stop these troops walking into a trap, and that unfortunate person just so happens to be Lance Corporal Blake and his friend Lance Corporal Schofield.
And to give added incentive to the mission, Blake’s brother is one of those troops about to be ambushed. The two comrades therefore set out along the trenches, before crossing enemy ground, traversing the countryside, and braving countless dangers in a bid to reach the troops in time.
It is an extraordinary piece of film-making with its one shot technique (possibly around nine though there is only one obvious cut), as the camera spins and pirouettes its way around the extras and sets to maintain focus on the two leads. The vision, planning and delivery are all incredible and the film should, and no doubt will, be recognised for its unparalleled ambition and execution.
1917 also has a remarkable cast aside from its two young leads of George MacKay and Dean-Charles Chapman, with what is essentially a range of high profile cameos including Colin Firth, Mark Strong, Andrew Scott, Daniel Mays, Benedict Cumberbatch, and Richard Madden. The cast is impressive and the scale huge, all adding to the overall feeling of limited time which adds to the time sensitivity of the plot in some senses, but also means that none of the characters, including the leads, are ever really given time to breathe or the audience time to get to know, let alone understand them.
As we are rushed from set piece to set piece, it feels at times like a tick box mentality or even a video game with each level requiring passage whether that is trenches, planes, deserted farm, no man’s land, or inhospitable countryside. As a result, it means that the audience is not as invested in the characters as much as say other classic war films such as Saving Private Ryan, Full Metal Jacket, or even Band Of Brothers.

In A Nutshell:
An outstanding piece of film-making with a remarkable cast, but ultimately lacking in plot and characterisation.

Lowpoint:
The plot and characterisation are weak, and it feels a little like a video game at times moving from level to level