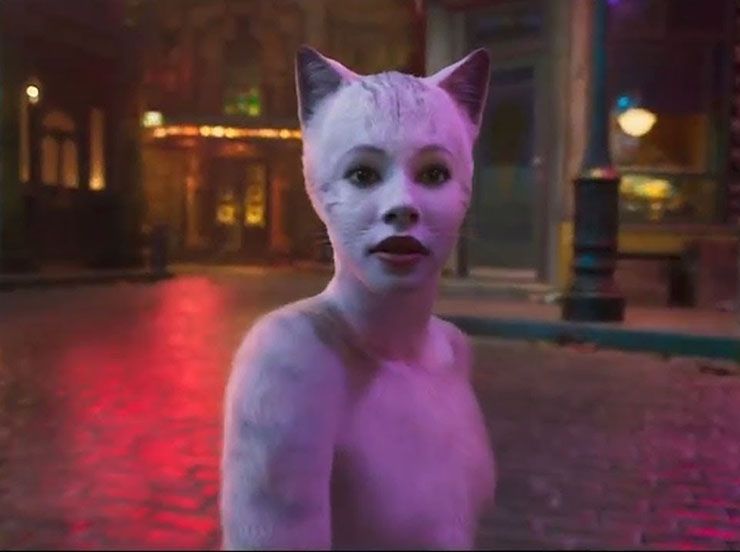 What’s It About?
After being abandoned in an alleyway, cat Victoria is introduced to the Jellicle cats and their annual custom of applying to reach their afterlife – but this year dubious character Macavity has plans to rig the vote in his favour.

Audiences Expect:
After being a smash show on Broadway thanks to Andew Lloyd Webber, Cats’ successful transition to the big screen under the watchful eye of Academy Award winning director Tom Hooper was a certainty. But then the first trailer hit the internet and all hell broke loose. Fast forward a few months, plus some revisions, and Cats is all set to open at the box office.
Unfortunately, initial fears were well founded, although in truth the problems arise in lots of areas and not just from the looks of the felines. The story, as such there is, is taken from the musical which in turn is taken from TS Eliot, and sees a young cat, Victoria, abandoned in an urban slum, where she is ultimately taken in by the Jellicle Cats. We know this because they cannot stop singing about themselves for what feels like the first half of the film.
As she gets to know them, and is accepted into their ranks, Victoria also learns their customs, which involves elder cat, Old Deuteronomy, choosing annually one lucky furball who is deemed worthy of heading to the afterlife to be reborn into something better. And the test for this seems to be a little like X-Factor or Britain’s Got Talent. Think of Old Deuteronomy as the Simon Cowell of the process, though perhaps a little nicer and with a few more lines, while the contestant needs to be able to sing and seemingly have a heart-breaking backstory. Fortunately there is no Ant and Dec in this, though Rumpleteaser and Mungojerrie are an equally irritating double act.
There is one single element of danger in this story though, with the evil cat Macavity looking to rig the vote and win the day – and well, that is pretty much it.
First off, the sets on this look pretty remarkable with a mix of bohemian London pizzazz and Dickensian squalour. The dance sequences too are brilliantly executed, while the ensemble Tom Hooper has pulled together is astonishing comprising everyone from Jennifer Hudson, Idris Elba, Judi Dench, Ian McKellen, Ray Winstone, Jason Derulo, James Corden, Rebel Wilson and Taylor Swift to name but a few. Sadly though, this is not enough to paper over the cracks.
Unfortunately the cats still look a little weird. Yes the ears are slightly distracting, but as many others have mentioned, it is the sight of felines with protruding human breasts or genitals that really puts one off. Oddly some cats wear clothes and top hats and shoes, while others wear nothing at all.
The songs and energy levels too seem a little flat, while several renditions of songs including that of Memories seem to slightly devalue the showstopping tune, while the comic relief in the form of James Corden and Rebel Wilson simply doesn’t do the job providing neither hilarity nor relief, with the overall effect being that Cats really seems to drag at times.

In A Nutshell:
The hit musical has a less than purr-fect transition to screen, with a real lack of energy and something off about the outfits.

Highlight:
Perhaps somewhat predictably Taylor Swift’s all too brief cameo is the main bright point of the show
The set looked pretty spectacular

Lowpoint:
A distinct lack of energy
The look of the cats with breast and more oddly prominent