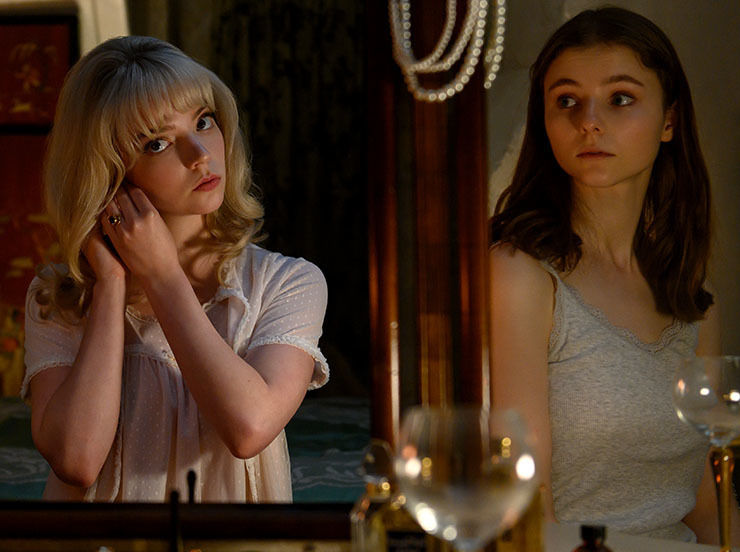 What’s it About?
An aspiring fashion designer from Cornwall goes to college in central London, but is transported to the 1960s and lives vicariously as wannabe singer Sandie. But things in the ’60s are not as glamorous as they seem.

Audiences Expect:
After the huge success of his Cornetto Trilogy and then the wonderfully slick Baby Driver, Edgar Wright presents us with Last Night In Soho – an homage to London in the swinging Sixties and the danger of a rose-tinted perspective.  Given recent news stories with regards to the safety of women on our streets and the role of the establishment, this film feels very timely indeed.
We meet Eloise, a fresh faced young girl from rural Cornwall who comes to the big smoke to pursue her fashion dreams, but immediately there is the element of danger with seedy cab drivers and predatory men. Eloise is very much an innocent figure, homely even, who finds comfort in the past particularly the Sixties in terms of its style, fashion and music.
Eloise is then mysteriously transported to the Sixties, specifically living the life of an intriguing and vivacious girl named Sandie, who wants to kickstart her singing career in London. Sandie is everything that Eloise is not: worldly, confident and glamorous. But Eloise, and indeed Sandie too, soon discovers that the swinging Sixties are not all that different from today, with its murky underworld, continual dangers and exploitation of women.
Thomasin McKenzie continues her remarkable career so far, perfectly cast as the wide-eyed fish out of water, while Anya Taylor-Joy is a joy to watch on screen exuding Sixties style. The pair are beautifully complemented too by Matt Smith in suave mode, while Wright’s evocative imagery of Sixties London is a joy to behold.
It is also a pleasure too to see him dabble in less horror-based features with this intriguing premise. Unfortunately though, despite its promising opening, the film does not live up to the hype. Wright’s characters lack depth, most notably fellow students Synnove Karlsen and an impossibly nice Michael Ajao, while the leads are pretty limited too.
Sadly the final act is somewhat underwhelming, returning to Wright’s regular tropes, while there are some justifiable concerns that while criticising the objectification of women, the film itself sometimes falls into that very trap.

In A Nutshell:
Despite two of the finest actors of their generation being on show, a look back at this slice of the Sixties is far from rose-tinted.

Highlights:
The incredible evocation of the swinging 60’s
Fantastic cast
Great opening half of the film

Lowpoints:
V weak characterisation of almost all the roles.
Poor final act
Disappointing after the opening half of the film suggested a new direction for Edgar Wright